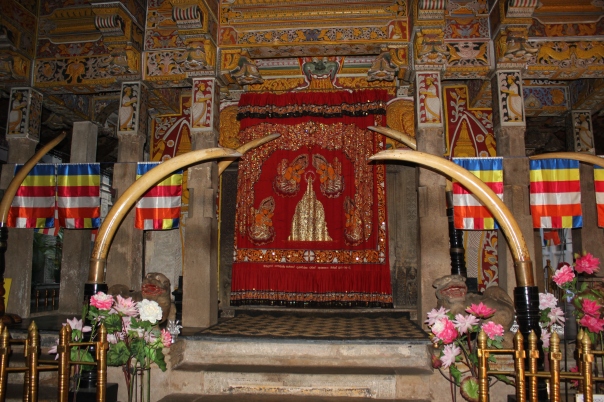 My most recent trip was to this small island in the Indian Ocean named Sri Lanka. But do not be fooled by its size. Even though it may be a small country, it has the biggest hearts that I have ever seen. Though it is fighting its way up the ladder when it comes to development, but it is totally blessed when it comes to natural bounty. Clad in lush green robes, this country is like a sparking emerald.

This serene and beautiful country is the home of many Buddhist people. It also houses one of the most prestigious and priceless thing of Buddhism, the Tooth Relic Temple. The Tooth Relic Temple is unique and different from all others because it has the last living sign of Lord Buddha- his canine tooth. The tooth was smuggled from India to Sri Lanka, hidden in the headgear of a princess. Why Sri Lanka you may ask. Well it was because Lord Buddha had sensed that this tiny, blessed land will be perfect for the growth of the religion. And indeed it was.

This beautiful temple is situated in the city, Kandy. The minute I stepped inside the complex, a wave of calmness enveloped me. The locals walking towards the temple, armed with lotus flowers always made it a point to send a genuine, warm smile my way. The atmosphere itself was so peaceful, I was felling happy from within.

Inside the temple, there is the chamber that holds the tooth. It is the innermost and the most holy chamber. Surrounding it are more chambers. The doors of these chambers are not always open. The priests go through the astronomical placements of the stars and the doors are opened only when there is an auspicious period as hinted by the celestial bodies.

People who had come to the temple along with us, sat there patiently, waiting for the doors to open. There were about 500 people in the praying area that time but it was so quiet, you would never believe that there were actually 500+ people present there. Everyone sat silently, praying and meditating and waiting for the doors to open. Even the small kids sat next to their parents instead of running around on their curious little legs like they always do.

Me being a Hindu, we rarely get such moments in our temples where there is so much peace and tranquillity. Out temple complexes are beautiful, serene and a class apart but somehow, thanks to the growing population and the never-ending faith in God, all temples are usually so crowded you never get the real feel of spirituality when you are in the temple. You join your hands, close your eyes and before you know it, the next person in the line is pushing you to have his time with God and your prayers are over even before you could start them. Ask anybody and they will tell you the same. It doesn’t happen always, mind you, but happens most of the times.

So when I was in this Tooth Relic Temple, I could sense it. The complete silence around me with momentary bursts of flash when people took pictures.  The tiny vibrations that sprung up at the center of my being. The tingling sensation under my skin. The serene tranquility caressing my mind.  I stood there, transfixed and my mind went blank. I closed my eyes and stared into the infinite whiteness before me. I couldn’t pray, the feeling in my throat wouldn’t let me open my mouth, the blank mind could hardly think of coherent words. And suddenly, somewhere within me, the overwhelming feeling took over and the dam burst. I began to cry, right there in the middle of the praying room. The tears rolled down my cheeks but I made no attempts to wipe them or stop them, I let them flow.

I have no idea why I cried or what made me get so emotional but one thing I know for sure is that on that special day, I felt so close to God, something I have never felt before in my life. I am not exactly an atheist, but my faith keeps wavering and what I experienced  in the Temple was something totally anew. That day, for the first time, I felt faith bloom in my heart and radiate throughout my body, warming me. A faith so beautiful , it taught me to look at life in a new way, a better way. A faith so strong, so pure and so soothing, something that I’ll never let go…

Exploring Best Indian Destinations for You

All is One, co-creating with the Creator

Walk and Bike in France and Europe www.walk-bike-camino.com

Smile! You’re at the best WordPress.com site ever

4 out of 5 dentists recommend this WordPress.com site

A Good Blog is Hard to Find

Showing America how to Live

Poetry, musings and sightings from where the country changes

No one told this to me

I Know I Made You Smile

I think a lot. Welcome to my wonderland; anxiety and romanticism flourishes here. (Disclaimer: I own all the pictures unless stated otherwise)